The 15th of February is coming up and, as many readers may not be aware, this day is dedicated to our third largest land mammal – the Common Hippopotamus (Hippopotamus amphibius). Nicknamed the “river horse” by the Greeks, these large mammals may spend up to 16 hours a day submerged in the water and can hold their breath for 5-6 minutes at a time. Hippos prefer to stand in the water, so although it may often seem like they are swimming, they are in actual fact walking with a bouncing movement on the river floor. This allows them to move rapidly through the water.

Don’t be fooled by the heavy build of this mammal on land, either. They may look like they will be slow but they are quite capable of reaching speeds of up to 36km/h. Despite their large canine teeth, Hippopotamus’ feed on grass and leave the water after sunset to graze. In times of low grass yield hippos may eat old elephant dung; however their food requirement is generally low due to their semi-aquatic lifestyle. Considering their huge size and weight of approximately 1.5 – 2 tons, their average grazing consumption amounts to only 40kg per night on average. 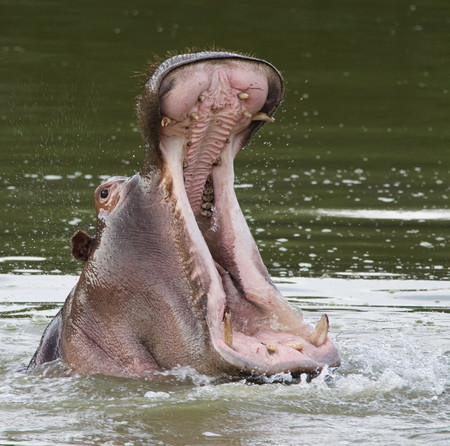 An interesting fact about the Common Hippopotamus is that they produce an oily red liquid that is termed “blood sweat”, which has a function of being a moisturizer and a sunblock that protects the skin against the sun.

There has been a long-standing and often deadly conflict between humans and the Common Hippopotamus living in unfenced wilderness areas. Contact is typically made when humans visit the rivers to collect water, wash clothes or bathe. Hippos have their own “safety zone” just like many other mammals we see on safari, except that a hippo’s safety zone is in the water. Many fatalities occur because hippos encounter a human between themselves and this safety zone. This has caused the Common Hippopotamus to be ranked as the second most dangerous animal in Africa, surpassed only by the malaria-carrying Anopheles mosquito.

Currently listed as Vulnerable on the IUCN Red List, hippo populations have been decreasing as their habitats shrink due to habitat destruction and urbanization. It has become vital for game reserves and protected areas to provide a safe haven for these magnificent creatures.