The Amakhala team celebrated its amazing giraffe heritage on #WorldGiraffeDay2021 on 21 June, an annual event dedicated to the world’s tallest animal. It is also an opportunity to raise awareness of the threats giraffes face.

In 2016, giraffes in the wild were listed as ‘Vulnerable’ by the IUCN, facing threats such as habitat loss, hunting and human disturbance. Thankfully, there has been a marked increase in the South African giraffe population, with the current population estimated at between 29,650 and 39,0001. As a result, South African giraffe are listed by the IUCN as ‘Least Concern’. However, conservation action is still needed to minimise threats, protect habitats and ensure the population remains stable in the future.

The South African giraffe (Giraffa camelopardalis giraffa) can reach a height of 5.5m and males can weigh in at 1200kg, while females weigh in at 800kg to 900kg. Being herbivores, giraffes only eat plants, using their long necks to reach the treetops. 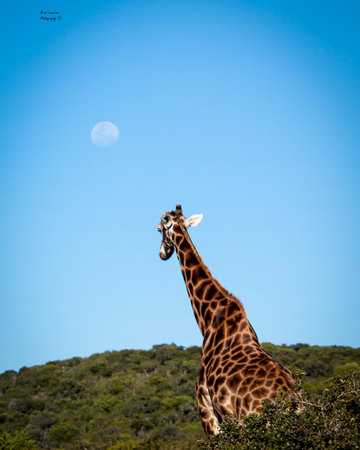 At Amakhala Game Reserve, we have the ideal habitat for giraffes to thrive, being both a recognised Protected Area and home to five of South Africa’s nine plant biomes (including tree species that are particularly enjoyed by giraffe, such as sweet thorn acacia).

Amakhala’s giraffes were the first mega-herbivores to be introduced after the establishment of the Reserve. Two giraffe were released in 1999, followed by eight more between 2000 and 2001 that were sponsored by Amakhala founding member Jennie Gush and her friend Lucky Shepherd. The first two baby giraffes were born on Amakhala the very next year.

Today, our guests regularly see these tall, unique mammals that tower above the trees they like to eat from, as they move together in a group – known as a tower, journey, herd or kaleidoscope of giraffe. Check out this fantastic video of Amakhala's giraffe captured by Ranger Brad.

You can help us keep these gentle giants protected by simply contributing to the Amakhala Conservation Fund’s Add-A-Bit account HERE. No matter how big or how small, every bit counts!