The Eastern Cape is home to a number of iconic endangered species, notably our rhino population. But it is not only our rhino that are being poached to the point of extinction!

On the IUCN Red List of Threatened Species – and also actively targeted by poachers - is the Alexandria Cycad or Dune Cycad (Encephalartos arenarius). It is unique to only a small area of the Eastern Cape in South Africa - from Nanaga in the west to Canon Rocks in the east - and grows mainly near the town of Alexandria.

South Africa’s cycads have existed, with little change, for 30 million to 40 million years and are often referred to as ‘living fossils’. All South African cycads are classified under Appendix I of the CITES Convention. To own a cycad, a permit is required.

Sadly, there are only an estimated 850 - 1500 mature Alexandria Cycads still left, and the small number of this endangered species continues to dwindle, as it has over the past 50 years, under constant attack from poachers and habitat destruction.
The Dune Cycad, as it is also called, is found in densely wooded coastal dune forest and scrub bush, mostly growing on moderate to steep slopes in sandy soil on stabilised dunes. Growing in sand, it is easily targeted and removed by poachers, who continue to plunder this priceless national heritage to the point of extinction.

In addition, the cycads face losing their small habitat, as much of the coastal dune forest in and around Alexandria has been cleared and lost to pastures.

Fortunately, there is a safe haven where this Eastern Cape treasure is being protected with the same passion as the local rhino population. “We are very proud to have a few pockets of Alexandria Cycads at Amakhala,” says Mark Palmer, Manager of Amakhala Game Reserve. “Just like our rhinos, our cycads are a treasured natural heritage and we go to great lengths to protect it for future generations.”

Endangered Species Day, held every third Friday in May, is an opportunity to learn about our endangered species, and why and how we can protect them. On 18 May this year, you can join thousands of others who care about saving our endangered species at wildlife refuges, zoos, parks, community centres, aquariums, botanical gardens, libraries and schools. 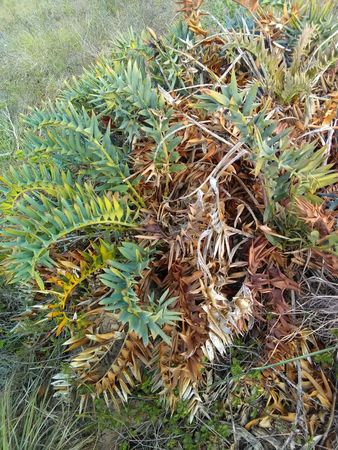