Orphaned Kudu “Nibbles” Released Back into the Wild

Lying alone in the middle of a road, only a few days old, an orphaned kudu calf was found on Amakhala Game Reserve last year February. The ranger that called in the incident was unsure what had happened to the calf or it’s mother, or if the kudu was injured. It was unusual to see a kudu calf alone at such a young age, as kudu moms hide their young in dense bush after birth and visit them regularly for nursing. Once the Amakhala ecology team arrived, it was determined that the kudu calf was not injured but abandoned. 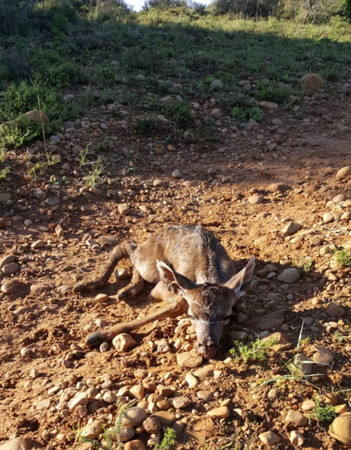 Amakhala Game Reserve does not normally interfere letting nature take its course, but being unsure if the abandonment was due to human influence or not, a unique call was made to take immediate action to ensure the orphaned kudu received the proper nutrition and care with the hope that she would be able to reintegrate back into the wild once she was older. The orphaned kudu calf was brought back to the Amakhala Conservation Centre (ACC), which does not primarily serve as an animal orphanage. 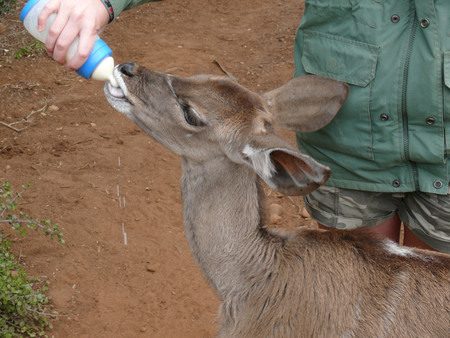 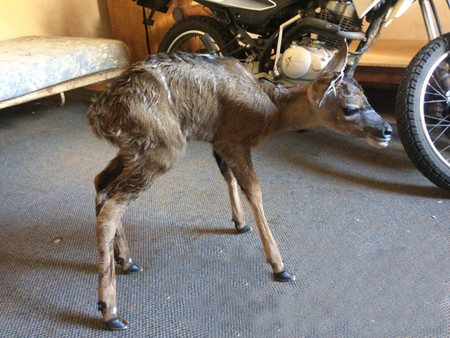 Soon named “Nibbles”, the orphaned kudu calf has been cared for, hand-reared and bottle fed every few hours by Natalie Fowler and Tammy Smith, part of the Amakhala ecology team, guzzling up to 2 litres of milk mixed with egg yolk and cream every day. The much-needed unpasteurised milk was generously provided by Malcolm MacKenzie, a member of Nanaga Farming Trust, a dairy farming venture located in the Eastern Cape, with the ecology team members taking turns to visit the farm with 2 litre bottles to fetch the milk. 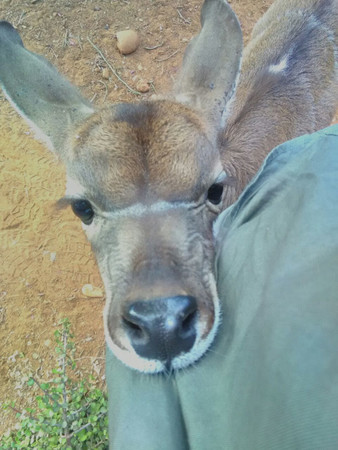 After 10 months of being bottle fed, Nibbles grew bigger and stronger with a zest for life, a natural curiosity and a character just as big! She soon found her way around the Amakhala Conservation Centre, spending her days browsing and grazing in and around the protected area of the centre. Although interaction was kept to a minimum, her big ears and big eyes together along with her affectionate and tactile nature made it difficult not to love her!

“Nibbles” loved both human interaction with her newfound reserve family as well as the school children visiting the ACC, who have all been enthralled by her. Nibbles also got spend some non-human interaction time playing outside the office with the reserve dogs. 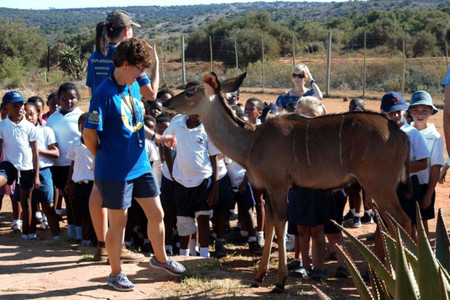 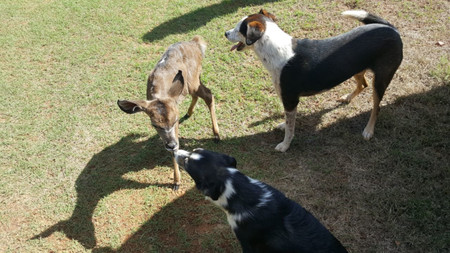 Her curiosity and inquisitive nature saw her visiting the reception desk at Woodbury Tented Camp on a regular basis. She then took a fancy to walking into the guests tents and helping herself to their toiletries and vitamins! Worried that she might swallow a visiting tourist’s Diners Club Credit Card, the ecology team realised that it was time to release Nibbles back into the wild. 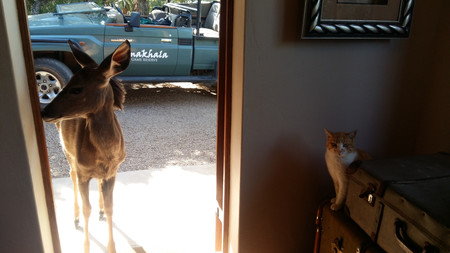 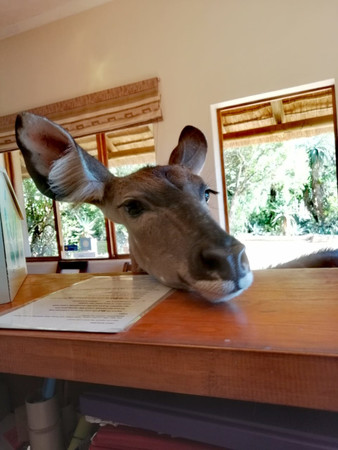 In May 2019 this year, Nibbles - now 15 months old – was released into a safe-game area known as Hillsnek 2, where she is in the company of other kudu. Although sad to see Nibbles go, the ecology team was also so excited: after months of hand-rearing her and after all the hours of bottle feeding, the day had finally arrived when Nibbles could return to the wild. What an achievement!

Check out this video of Nibbles being released back into the wild.

Tagged for identification and regularly monitored by the Amakhala ecology team and the team at Hillsnek Safari Camp, Nibbles has taken to her environment very well and is moving around quite a bit. As most kudu herds consist of females, she poses no threat to the other kudu. It should not take her too long to get used to the other kudu and settle in with the rest of the herd. 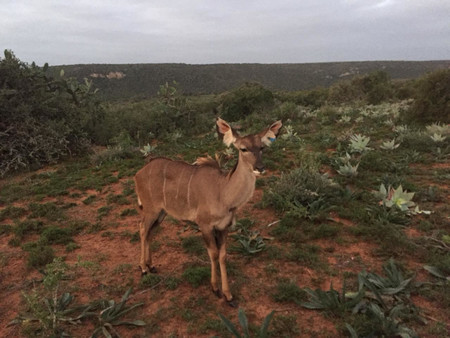 Kudu is a sub-species of antelope that is commonly found on game reserves and farms across South Africa. There are two species of kudu identified in Africa - the Lesser kudu and the Greater kudu. They are very similar and closely related, however the Lesser kudu has fewer white stripes than the Greater kudu. Kudu are herbivores and forage in and around thickets of shrubs, nibbling on leaves from trees and bushes and grazing a variety of plant life such as grass, herbs and succulents like spekboom and aloes.

Kudus are extremely agile and can jump fences higher than three metres. animals Being naturally alert and nervous, kudu also have large ears and acute hearing. When disturbed, they are able to move away quietly or dash off if alarmed in any way by predators. They tend to stay in smaller groups, mainly consisting of female kudu and their calves, with solitary male kudu joining the herd during mating season. The kudu mating season occurs between July and August, with single calves being born from January to February, after a gestation period of around eight months. For the first few weeks, the calves are left in hiding in dense bush and visited by their mothers for nursing.