Vet students venture outside the classroom 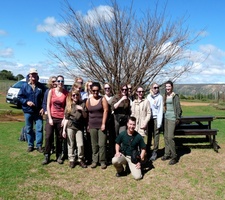 On the 28th of April 2015, the Amakhala Foundation hosted the UK vet students from Plumpton College. As part of their Veterinary Nursing degree, they completed a Wildlife course at the Conservation Academy (near Grahamstown) followed by a daytrip to Amakhala Game Reserve. Here, the reserve ecologist (Mark Palmer) presented an informative talk about the management of large mammals on small, private game reserves in the Eastern Cape. They were also treated to a game drive, where they could see some of these magnificent animals in action. Those that wanted to have a closer look at some of the more dangerous species were able to do so (safely…) by means of the specimens in the Harrold Trollip Museum.