In a win for the entire Eastern Cape tourism industry, top field guides at Amakhala Game Reserve, situated in the malaria-free Greater Addo and Frontier Country area of the Eastern Cape, were recently awarded the 2017 Frontier Award for Excellence in Nature Guiding in the Eastern Cape.

Like our established breeding populations of Africa’s Big 5, the Eastern Cape’s highly trained and qualified field guides are an important asset to the local tourism industry, making this award a win for the entire EC tourism industry.

Excellent field guides are great ambassadors for the rich and spectacular heritage of our province. Their knowledge and passion enable tourists to experience the natural beauty, wildlife, ecology, history and culture of the environment personally and yet safely. This instils a deep appreciation of nature and conservation among tourists, and ensures that visitors are more likely to return often and tell others about their EC safari adventures. In this way, field guides play a vital role in the growth of tourism in the province. Fortunately, our local field guides are among some of the most highly trained and qualified field guides in South Africa.

This was recently re-affirmed when the top field guides at Amakhala Game Reserve, situated in the malaria-free Greater Addo and Frontier Country area of the Eastern Cape, were awarded the 2017 Frontier Award for Excellence in Nature Guiding in the Eastern Cape. 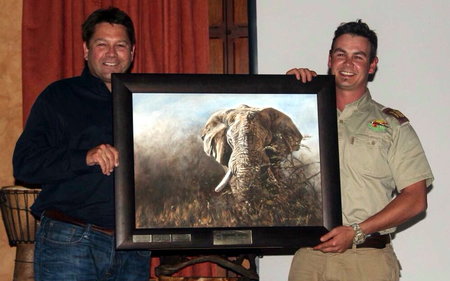 The team of dedicated field guides were honoured and recognised for their outstanding field work at the Field Guide Association of Southern Africa (FGASA) Eastern Cape Annual General meeting held at Lalibela Game Reserve. The award acknowledges an exceptional contribution in the region and the greatest development in the level of guiding in the Eastern Cape. Justin Barlow, Amakhala’s Head Ranger, and Jason Smith, Amakhala’s Deputy Head Ranger, received the award on behalf of the Reserve. 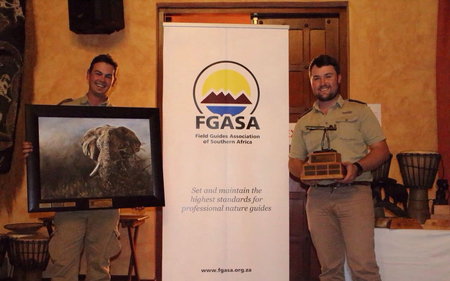 Smith also received the Settlers Award, sponsored by Andrew Kearney from Shamwari, for the acting guide who scored the highest in one round of an advanced weapon handling assessment over the year.

The association promotes a high standard of tourist guiding, skills development and job creation within the tourism industry, sets standards for nature guiding practice and provides educational opportunities to promote the conservation and rehabilitation of the cultural and natural heritage.

This strong and steady development of the Eastern Cape eco-tourism industry over the years provided the opportunity for the establishment of the Amakhala Game Reserve in 1999, when four neighbouring farming families joined their farms together. In time, the wildlife population increased and other species were introduced to the area, requiring greater management of the ecosystem.

The strong conservation ethic of the Amakhala Game Reserve is evident in the high standards and guiding practices that form part of their commitment to conservation and tourism. This includes investing in the training of Field Guides under the supervision of Ulovane Environmental Training, an accredited training and assessment provider.

“At Amakhala Game Reserve, we believe that being a Field Guide is not just a job, but a pivotal role as an ambassador for our region and tourism,” says Richard Gush, owner of Woodbury Lodge, Amakhala Game Reserve. “Every year we celebrate the great work within the Amakhala family with the Amakhala Guide of the Year Award. This year the award was presented to Learnmore Mwaromba, our Senior Field Guide at Woodbury Lodge & Woodbury Tented Camp. The award is voted for annually by the Amakhala guiding team and the management team, and the criteria include: most improved guide, enthusiasm, assistance to new guides, correct radio procedure, knowledge, and up-to-date FGASA qualifications. It is a great honour to have received the 2017 Frontier Award for Excellence in Nature Guiding in the Eastern Cape – we are very proud of our Field Guides!”